All the new features for enterprise at WWDC explained

Apple on Monday upgraded the OSes that power its devices during its WWDC developer conference. And Appaloosa was there! One week after WWDC, it’s time to sum up what we learned so far:

There are our four important changes for app developers. 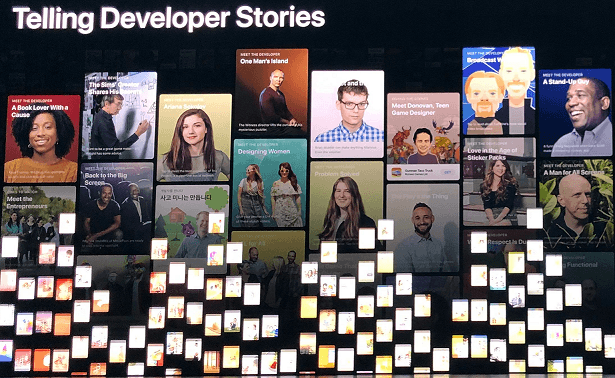 The most important change for developers is Apple’s take on reviving the Mac App Store and making it easy for mobile app developers to develop for the Mac.
Called Project Catalyst, it enables developer to re-work their iPad applications so they can run on Mac computers.
This will hopefully help revive the Mac App Store ecosystem, leveraging a much broader developer ecosystem. Using just XCode, developers can now export their build to publish on the Mac App Store.
Apple is already using this technology with some of their flagship apps for the mac such as Home or News.

Currently, developers who want to be on the Mac App Store and who already have iPad/iPhone apps need to rewrite the whole app. The inclusion of the Swift runtime in MacOS 10.15 Catalina will enable this new breed of apps to run natively.

Overall, this new capability will free up developers’ time to focus more on features and keep one source code for three platforms. Atlassian has demoed their app and stage and it seems that Twitter is coming back to the Mac using this technology.

Apple has branched iOS 13 to make room for a dedicated OS for the iPad lineup. On stage, the company demonstrated its intent on making its iPad lineup even more capable. For instance, iPads under the new OS will include the ability to run multiple instances of the app, split the view and move windows freely just like a desktop experience.

The home screen has also been revamped to include widgets that can be expended from the side of the screen, alongside app icons.

Apple this year showed, even more, its intention to make the iPad a desktop-class device with new multitasking features, split views and improved web views.

We think this year’s branching of OSes marks a significant step and might have an impact on developers in the years to come, as iPad and iPhone experiences are also branching, requiring developers to think both platforms as real, separate experiences.

During the conference, developers were visibly delighted by the introduction of SwiftUI in Xcode 11, which aims to make development faster with a modern UI framework.

The new and simple declarative code enables the developer to create great, full-featured interfaces, animations with only a fraction of the code that was required before.

Also, developers can now automatically preview their UI in real-time to fine-tune, test and refine. Developers can switch between UI and code easily and edit element properties graphically.

We think this new technology will enable the creation of fast MVPs at a lower than ever cost. It might also help designers get more involved in Xcode during the very prototyping phase.

Finally, we think SwiftUI needs more real-life testing, as it seems it will be very useful to create apps that are very close to Apple design guidelines and might not be a good fit to refactoring apps using a lot of custom views.

This year’s underlying theme at WWDC was privacy. It was infused into almost every session after the keynote.

Apple even seemed to twist the knife into Facebook and Google.

The most important announcement was the introduction of “Sign in with Apple”, new option developers might be required to add to their apps already supporting Facebook or Google so that users can log in without having to create a separate account and protect their personal data.

Indeed, Apple says that this solution doesn’t collect personal data and that users can review or filter the data they want to surrender to the app.

It also includes the ability to create a “trash” email address to avoid spam and identify who is selling your data. This ability can also terminate easily the communications with an entity with the account is closed.

We think that given the context and the recent scandals, this is a great addition as there is not much in place yet to log in privately across all apps. However, it is a strange stance from Apple to make it a requirement for developers who make use of third-party login features.