Developing an app is an investment. Obviously, the goal is rarely to spend excessively or to work for months for a result that doesn’t exactly fit to what you want. To get a clearer picture, we present you here the three major app families (native, web and hybrid), and we give you tips to make sure you’ll make the right choice.

The figures revealed by StatCounter confirm it: in September 2018, global Internet users are now 51.4% to do their research on mobile against 44.12% on desktop (the remaining 4% are using tablets…). In other words: if you develop an offer, service or product that you have planned to monetize via a digital channel, it is therefore absolutely necessary to set up an app to reach the (very) many users that only access Internet through their smartphone.

Mobile has taken the lead. And it’s up to you to get to your (future) users with an app that allows them to access your offer. Only: must it be native, web or hybrid?

1 – Your budget is limited, and your app’s UX is the least of your worries?

Opt for a web app.

A web app is neither more nor less the mobile version of a website. So there is no need to develop multiple versions for multiple operating systems: this is the option to take if your budget is tight and you don’t see your app as a crucial broadcast or sales channel for your project. You prefer to invest in content, and don’t have too many resources to put in this app… Obviously, there are all kinds of web applications (sometimes also called “responsive websites”), and the result can vary depending on the content.

2 – Your UX has to be the best on the market, and you have sufficient resources to choose the best?

Opt for a native app.

It’s the grail of apps! The native app is what we intuitively think, when we think of an application. This is the real app, the one you download on the apps store, the one that sends notifications to your users to capture them in their daily lives, and boost the rate of use and/or the sales of your offer. However, you have to be ready to put the price… And beware: the trap would be to develop your app on only one OS, which would cut you off from a (large) number of potential users (see figures cited above). This option is strongly discouraged. 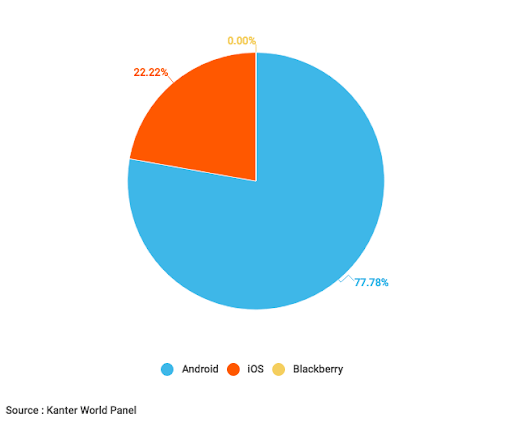 3 – Need an app that’s fast, efficient and functional, and still looks like an app, not a mobile site?

Opt for a hybrid app.

Do you still not understand what a hybrid application is? It’s very simple: it’s exactly between the web app and the native app. The best of both worlds!

4 – You favour UX and design, and a hybrid app seems a bit limited, but you don’t have the ability to develop multiple versions for multiple OS?

Developed during a hackathon organized by Facebook in 2015, React Native is a framework that allows to push a little further the hybrid side and have both its advantages, while opting for an interface closer to the application native than the hybrid app.

Well, as you can see, anything is possible:

If you have a very limited budget, the web app seems to be a good choice! However, be careful not to develop a product that will be far below the expectations of your (future) users. But if the use of the app will boil down to reading articles like Wikipedia, go for it!

If experience and design are part of the service itself (as is the case for Uber…), you have no choice but to develop a native, powerful and seamless app that will give your user a rich and unique experience.

The hybrid app or native react are probably the most interesting options if you do not have an unlimited budget, but you still bet on this channel, and you want to have an app that works well on any type platform (think of Instagram for example…)